AC Sparta Praha is a Czech football club from Prague. It is the most successful club in the Czech Republic.


Praha are currently third in the Czech Liga three points behind Viktoria Plezen . In the Europa League they were second in the group behind O.Lyon.


This should not be a difficult test for Chelsea but if they win it is a likely possibility that Chelsea might face Ajax in the next round.

Note: Petr Cech once played for Sparta and this is a photo of his time at Sparta. 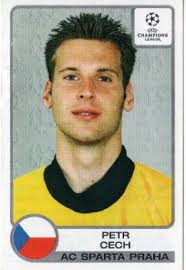