Wilfred Bony is a center forward who plays for Vitesse Arnhem in the Erdivisie. In the past couple of months there have been reports suggesting that chelsea are intrested in buying him. 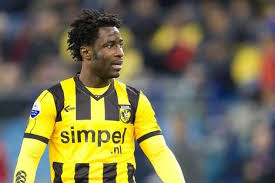 Wilfred Bony is 24 years old and is from the Ivory Coast and with 16 goals this season he is the top scorer in the Erdivisie. Chelsea  have a good relationship with Arnhem having loaned three players to them.

Bony will be much more cheaper than the likes of players such as Falcao or Cavani but he will be extremly useful for Chelsea .

He has also had something to say about Chelsea :-

"It's not the number one topic for me at the moment, but if they write about me going there, then it's great isn't it? But seriously, if they want me, it would be a great honor. I would be glad to go to such a club.""I love English football and wouldn't be afraid to play there. Chelsea are a top club. If Chelsea are interested in the winter and the clubs reach an agreement, then why not? We'll see what happens.""At the moment I want to be playing as well as I can for Vitesse. I know that Chelsea and Arnhem are close and some of the Chelsea lads are here on loan, including Tomas (Kalas). I have discussed it with him many times already."


If the reports about Sturridge to Liverpool is true then Bony will be more than useful for Chelsea .