Chelsea are set to capture the 22 year old Leverkusen starlet for a reported fee of  $32.5 million. 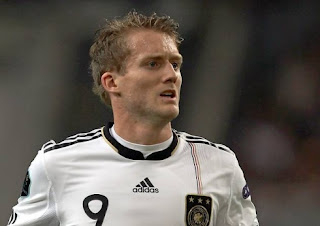 The 22 year old is a regular starter for his team in bundesliga and has caught the eye of many teams from the premier league.

Schurrle can play as a striker or as an attacking midfielder.
He has 11 goals and 6 assists this season.

Here is a video compilation of Andre Schurrle :-

His agent said that the proposed transfer might be completed even before the end of the season.
Some report suggests that Kevin de Bruyne would go to Leverkusen on loan as a part of this deal .

This seems to be a good buy for Chelsea as they are short of striking options up front , his versatility can be used well by the club.
Posted by Unknown at 14:28